Home - Support us - Volunteering - Volunteer stories - Chris, a volunteer at the Royal Hospital for Neuro-disability

Chris, a volunteer at the Royal Hospital for Neuro-disability

Meet Chris, one of our volunteers 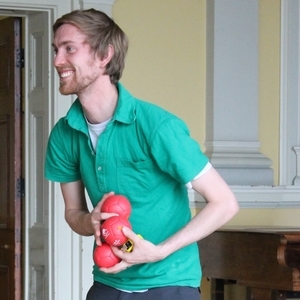 “You wouldn’t get people coming back here to volunteer year after year if it wasn’t rewarding for them.”

After eight years of medical research in a variety of fields culminating in three years as a post-doctoral researcher at King’s College London performing MRI scans, Chris Chaddock had an epiphany.

“I knew the work I was doing could potentially help people in the long run but the effects for the patients would not be felt for years, even decades. I wanted to help people now.”

That’s when he knew he wanted to train and qualify as a doctor. But before he committed himself to another four years of education, he needed to be sure.

“I wanted to check that medicine was definitely for me so I needed to spend as much time with patients as possible. I started contacting hospitals to find out what sort of volunteering opportunities they had but often found they only had administrative placements.  I wanted to volunteer where I would make a direct impact to the patients I was working with, rather than it being just a box ticking exercise for my university application. Then I found the RHN – it’s great because I get to spend time with the patients every week.”

Chris started volunteering at the RHN in May 2011 just as the regular Monday afternoon Sports Group was being set up. The group is an opportunity for residents who are sports fans to get off the ward and take part in competitive, sporting activities.

“We do all sorts of activities in the group but normally end up playing boccia (a form of adapted bowls) as that is what everyone really wants to do. We normally get a core group along which is great because you can form a strong relationship with them quite quickly. It’s so rewarding to see them succeed at something they initially didn’t think they would be able to do.”

Chris finds the experience really rewarding on a personal level but it has provided him with so much more.

“It’s great in terms of developing your communication skills as most people I’ve worked with have limited spoken communication or ability to understand complex sentences. It really makes you focus when you are trying to communicate and hone your skills. I was also able to speak about my volunteering experiences in the interviews I had with universities this year.”

Sadly for the RHN’s volunteering team, Chris is leaving to study Medicine at Oxford – good luck with the course Chris!