Disability History Month 2020 at the RHN

Disability History Month 2020 at the RHN

To commemorate UK Disability History Month the RHN Archive Service is giving public access to some of the items in its collection for the first time. This is on its heritage pages and on Twitter.

When the hospital opened in 1854 there was very limited provision for people living with disabilities. People were largely dependent on friends and family providing provisions and support. Our founder, Reverend Andrew Reed, saw the need for a home for people living with chronic disabilities. He also saw the need to support those who could continue to live in their communities. So from the beginning there were two types of patients at the hospital; in-patients and the pensioners. The pensioners received an annual sum from the hospital. This provided them with an income and medicines. The Hospital Board of Management admitted some pensioners to the hospital if they could no longer live independently. The number of pensioners peaked at around 700 in 1920s. It gradually declined until this type of admission stopped in 1951. The last remaining pensioner died in the 1990s. 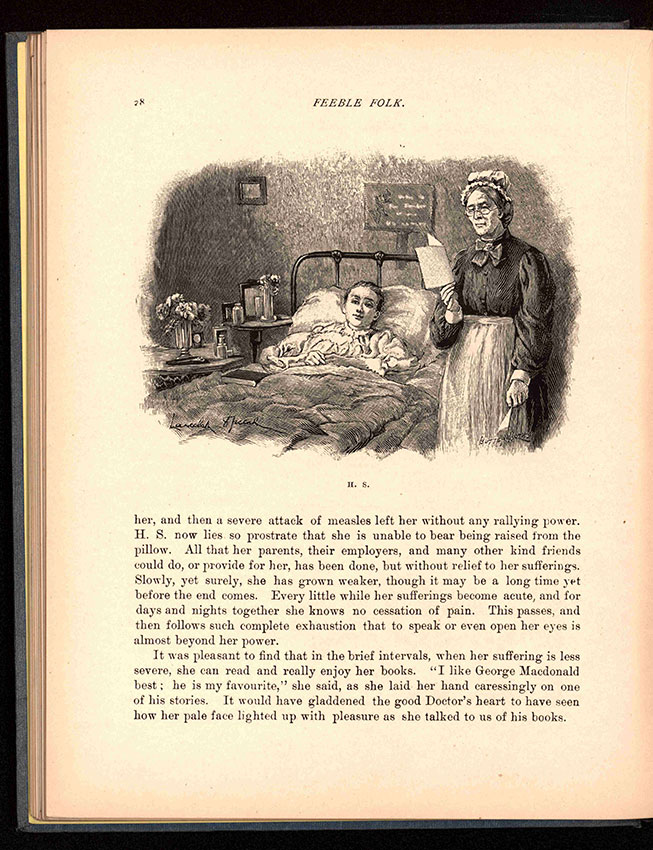 Pensioners were subjects of previous Christmas appeals. ‘Feeble Folk: Notes of a Ramble in the West of England’ was an appeal in 1899. Above is a sketch of a patient named as ‘HS’, the youngest pensioner at the time. She had a fall as a child causing spinal weakness. and later had rheumatic fever. The text describes how when she is well enough she reads novels, liking the novels of George MacDonald the best. Her parents still worked but were getting old. The pension provide them with the means to support their daughter.

To find out more about the pensioners at the hospital and our previous Christmas appeals you can watch our Open Lecture by our Archivist, Chris Olver, and Dr Sinead Moriarty, Lecturer, Department of English, Trinity College Dublin .

The Open Lecture, and the cataloguing and digitisation work which supports, it is supported by the generous funding of the National Lottery Heritage Fund.

UK Disability History Month (18 November to 18 December) started in 2010. It created a platform to focus on the history of people with disabilities’ struggle for equality and human rights. This year’s theme is Access: how far have we come, how far have we to go?