Matron supports wedding dream for RHN resident and his daughter 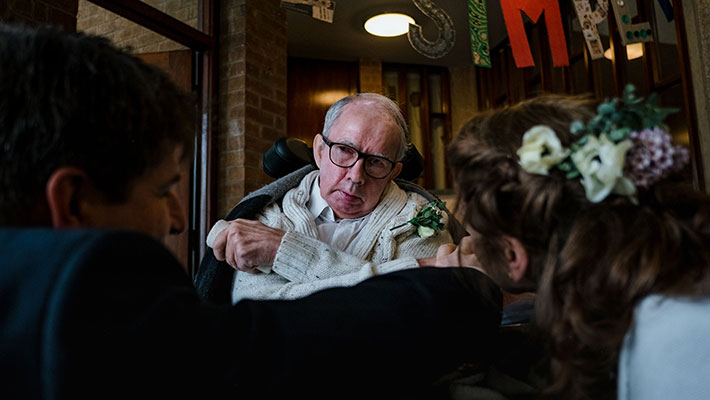 Matron supports wedding dream for RHN resident and his daughter

It is not unusual for staff to go the extra mile for patients and residents at the Royal Hospital for Neuro-disability but rarely do they have the opportunity to make wedding dreams come true.
Nathalie Kamm’s father Steve is a resident at the RHN. Steve first came to the RHN in 2015 after a traumatic brain injury in 2014.

In February 2021, Nathalie reached out to Laura Chapman, Matron in charge of the specialist nursing home at the RHN, about her upcoming wedding.

“We began organising our wedding at the end of February and in light of life being so uncertain for the last year, decided to organise for March when guest numbers were due to increase,” said Nathalie.

Strict measures on weddings had been put in place by the UK government to help control the spread and risk of COVID-19. Some of these measures eased in March, meaning a total of 15 guests could attend wedding events.

“We were uncertain as to whether any of the important people in our lives were going to be able to attend due to COVID-19 restrictions, so when I asked the RHN for the possibility of my father attending, I was completely astonished when Laura emailed to say that it would be possible following risk assessment and details of access. I thought perhaps there would be the option of him watching on live stream at the most,” Nathalie explained.

“We first met Laura when dad was on Devonshire ward and it was lovely to see a familiar face accompanying dad, so we knew he would be in good hands,” said Nathalie. 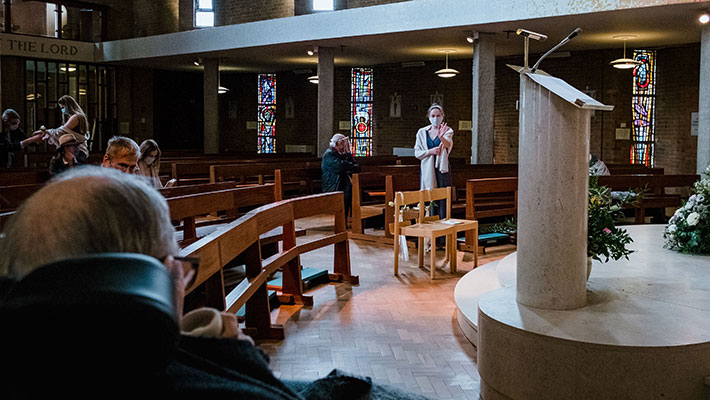 “Steve is a family man and married at the same church. He was also present at his elder daughter’s wedding at the same church, so it was important that we were able to support Steve to watch his youngest daughter walking down the aisle too. We completed all risk assessments and plans to make this possible,” said Laura.

Many residents have not had physical interactions with their families since November 2020 due to government lockdown restrictions and strict precautions put in place by the hospital to protect patients and residents from coronavirus.

“It brought us so much joy that dad was able to be part of our wedding. It was the first time he met my then fiancé, Neil, while awaiting the service to begin (and appeared to approve!). It was also the first time I had seen dad in person for about six months. It would also have been significant for Steve since he would have had such strong memories of his parish community at St Clements Church: the place where he and my mum were married some 44 years earlier and where he would have regularly attended mass,” 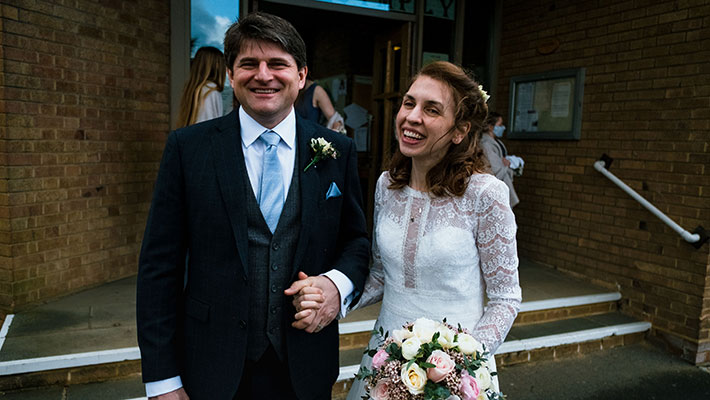 “Although dad has missed the regular contact of family over the past year, it was clear that this was very moving for him emotionally (as it was for us) and he shed a tear or two and was alert and watchful throughout. I feel it was reassuring for dad to see familiar faces of those known and loved. It felt like life was normal again for a day, and a hope for brighter times to come.”

“Family is hugely important for people who have suffered from a brain injury. The impact of family interactions and purposeful activities is precious and this was evident when I escorted Steve and observed his expressions and behaviours at the wedding. He clearly enjoyed it and was overwhelmed. This was the first time he had seen his whole family together including his young grandchildren in over one year,” said Laura.

Surprisingly, Steve has not been the only resident at the RHN to attend their child’s wedding in recent days. Another patient, Brigid, was also supported to attend her daughter’s wedding. In 2017, a wedding ceremony was held in the hospital’s De Lancy Lowe room for patient Ian and his wife Doreen.