The RHN is a treasure trove of extraordinary events

The RHN is a treasure trove of extraordinary events 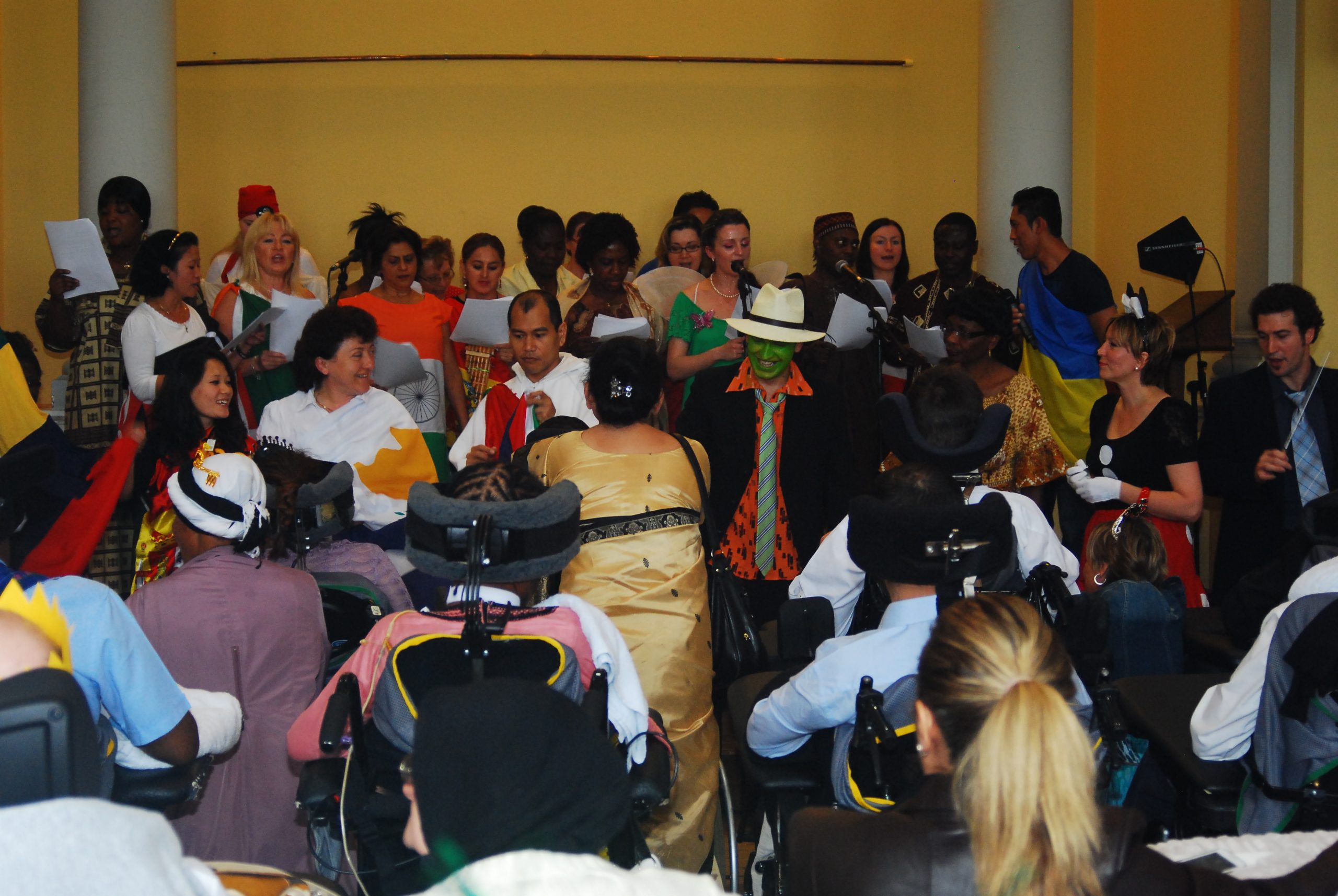 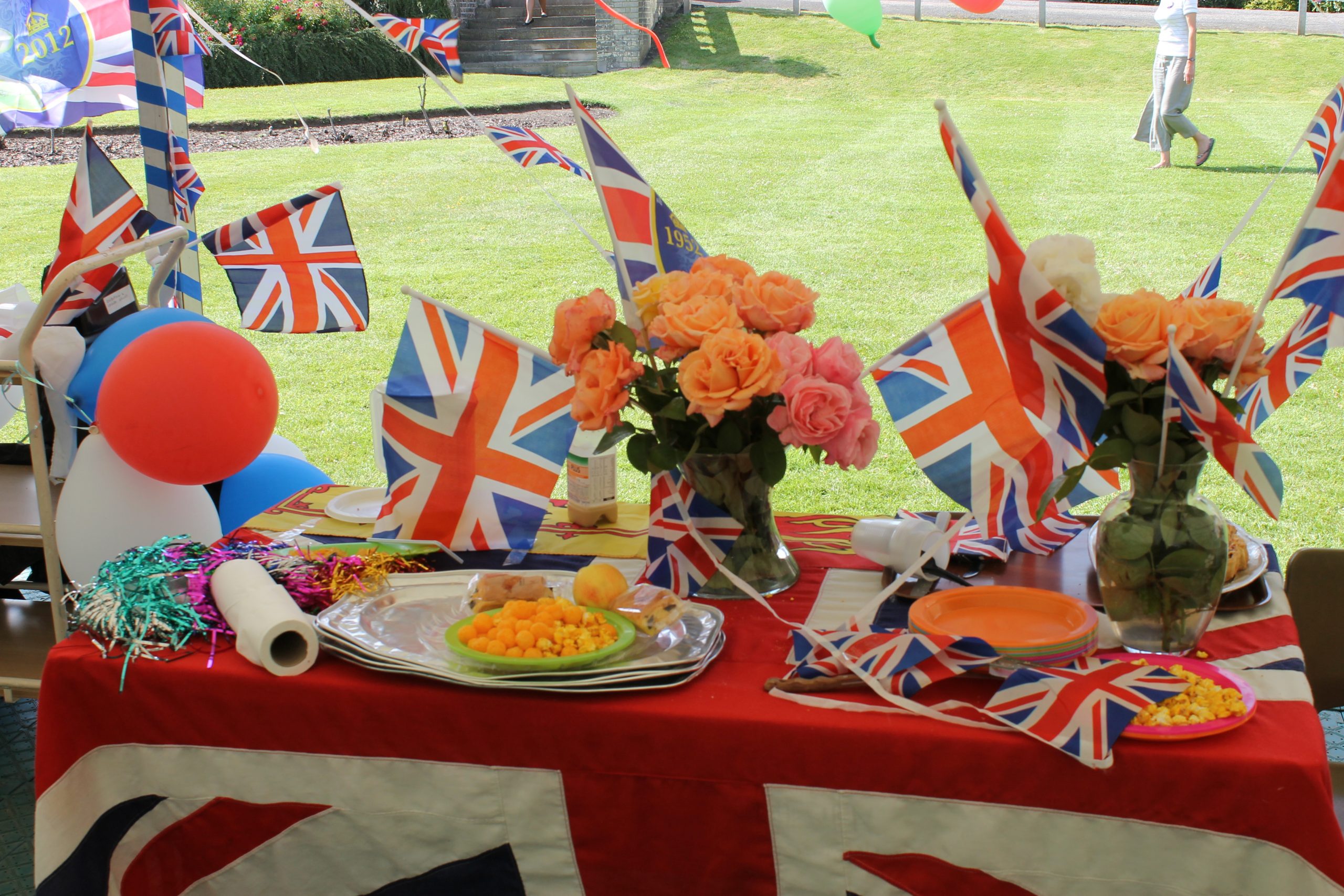 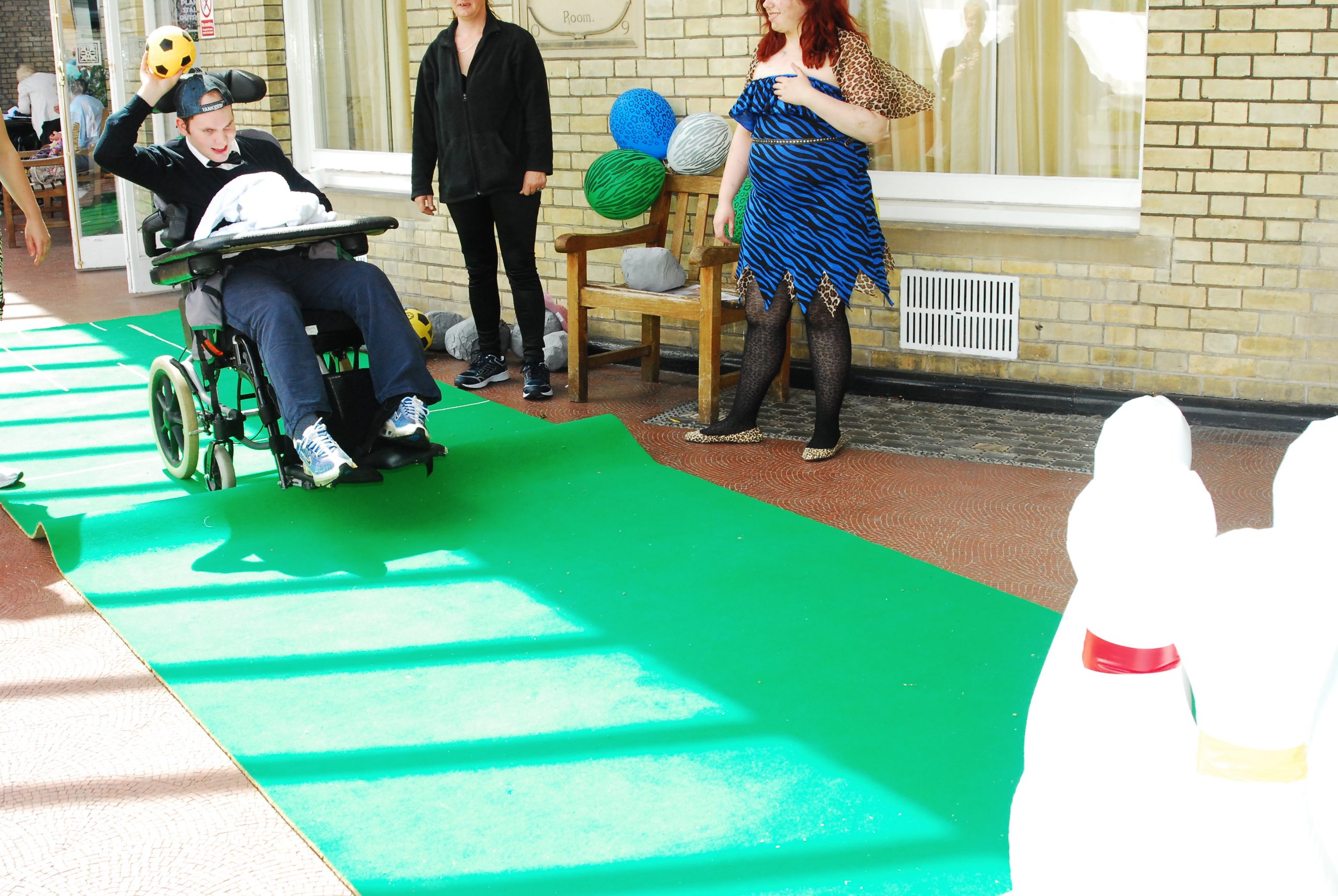 The great Corridor Challenge of 2020 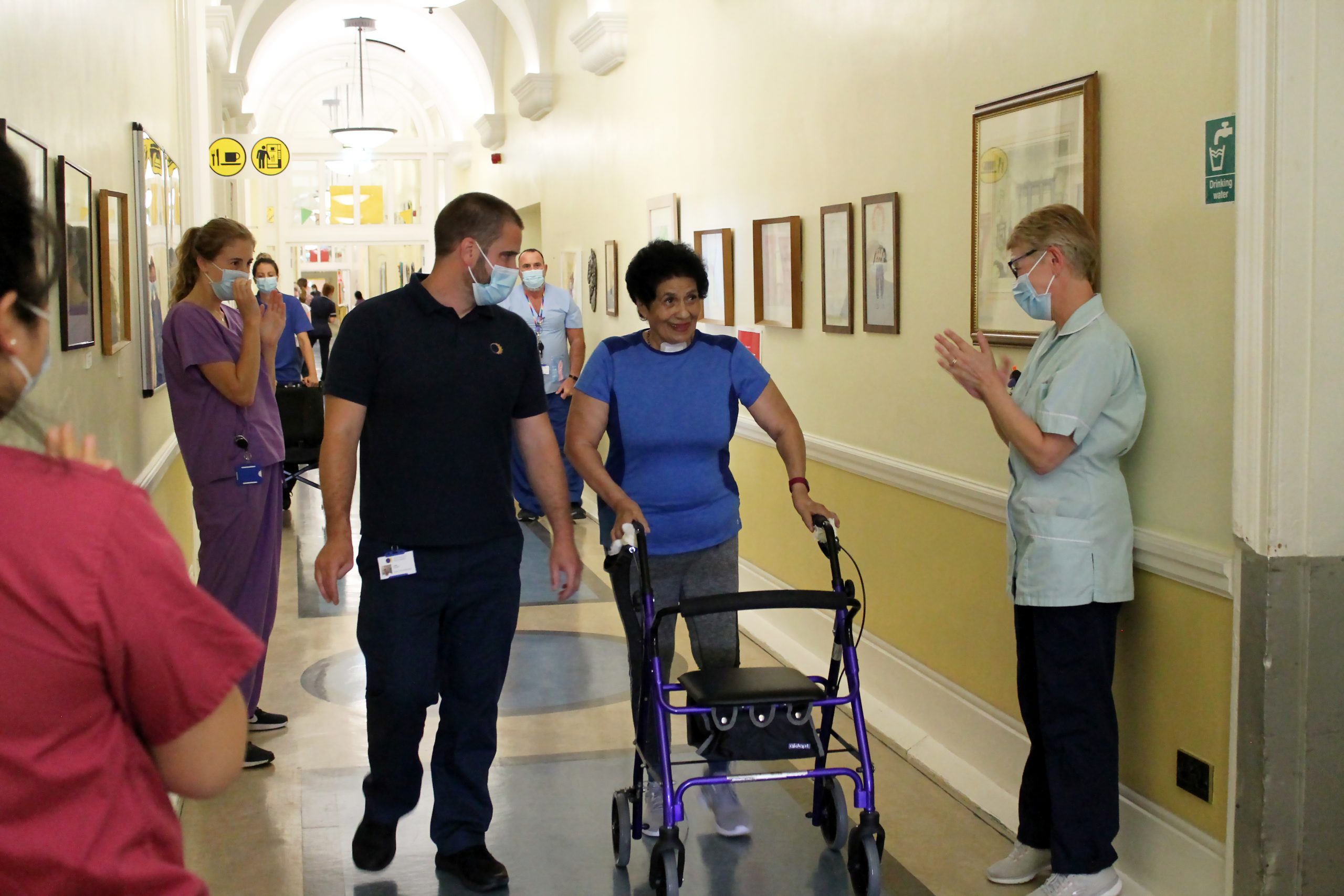 Two years ago, four RHN patients took on the challenge to walk a 100m corridor, raising funds for the hospital. Considering that none of them had been able to walk just less than 3 months beforehand, this feat was brave and remarkable. Bernadette, David, Graham and Nicole raised £5,600. In a piece on the RHN website, Bernadette, who was the creator of the challenge said: “I’m so grateful to everyone at RHN for improving my quality of life and helping me to gain back more independence. I wanted to do this challenge to give something back and help to raise some money for this fantastic hospital.” Read article here 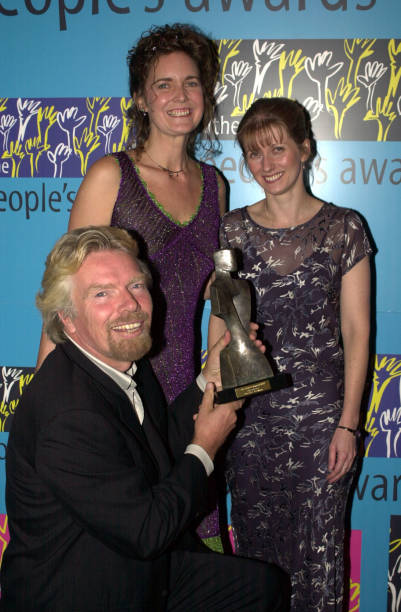 In 2000, Helen and Ros jointly won the BBC People’s Award for Innovation.

SMART was developed at the RHN in 1987 as an assessment for people with prolonged disorders of consciousness (PDOC) in a Vegetative and Minimally Conscious State following severe brain injury. It is recommended in the Royal College of Physicians (RCP) national clinical guidelines (2020). It has been carefully refined over the years and its precision has made it one of the assessment tools of choice for clinicians, lawyers and case managers. It is now used internationally and in high-profile medico-legal cases in the Royal Courts of Justice.

The assessment of PDOC patients has been described as “detective work at its best”. As in any serious detective investigation, it is essential to have a consistent and experienced investigator, layering evidence and building up a picture of the patients’ responses over time. This detective must also conduct an in-depth assessment, asking anyone involved, such as family and team members, to describe what they have seen and carefully assess reported responses in context.

SMART has recently been updated to the SMART-PROFILE which has been fine-tuned to provide a more concise patient-focused assessment. Where there is potential, the patient’s responses are further explored with additional investigative techniques.

This collective record and transparency as to the patient’s abilities and responses add clarity and evidence to inform discussions and decisions made at best interest meetings. A major advantage of SMART is that it provides a measurable outcome intervention and/or management plan with a coordinated team and family approach making the tool popular with lawyers and case managers and community teams who are responsible for providing focused and cost-effective programmes for the patients in the future.

In this interview Helen Gill recalls the development of SMART at the RHN.

All volunteers wherever they work are amazing, and we are very lucky at the RHN to be joined by a large team of volunteers.

Click below to listen to an Open Lecture from September 2021, where 3 of our volunteers – Rachel (who had a befriending role on Chatsworth ward), Sam (who supported the Music Therapy team), and Richard (who helped run a shuttle bus service for patients) tell us about their experiences: 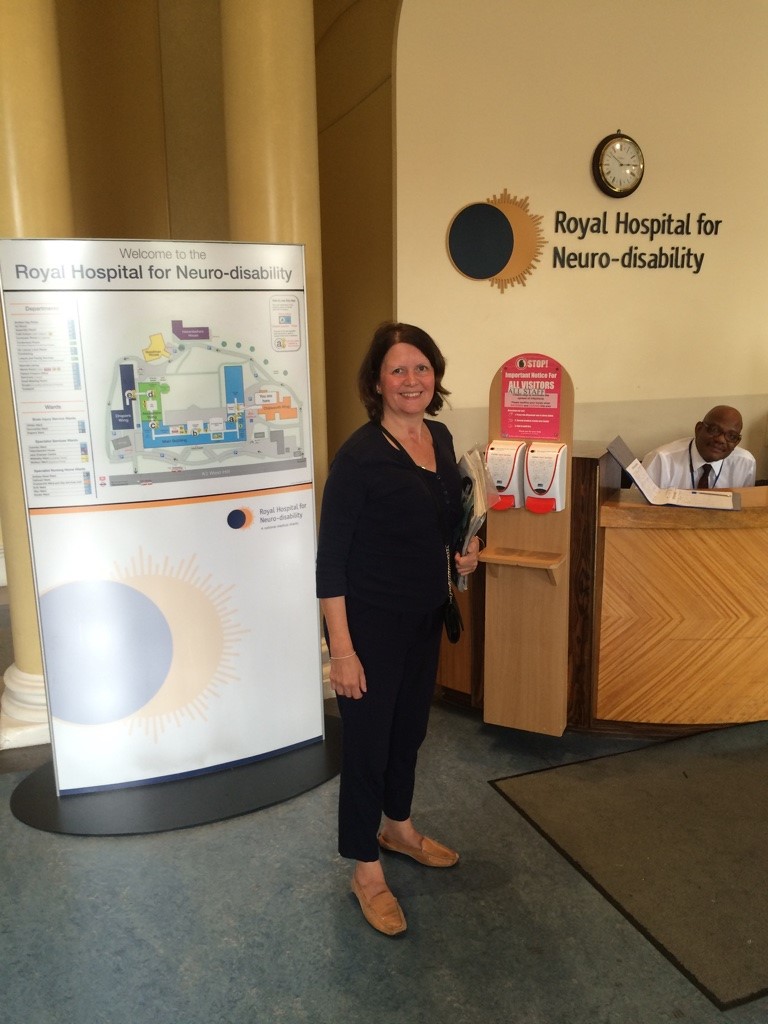 ‘Trudi used to be a patient here at the RHN. She was also a doctor working at King’s College Hospital, and back in 2015 in the lead-up to Christmas she was at a colleague’s leaving party when she had a seizure which turned out to be a large subarachnoid haemorrhage. It was incredible that she was in a room full of doctors, nurses, neurosurgeons and hospital staff and just several metres away from the A&E department and CT scanner. Following her time at King’s, Trudi was transferred to St George’s Hospital and began to regain consciousness. She then arrived at the RHN and stayed as a patient for rehabilitation. Trudi has now left the RHN as a patient but returns three days a week as she is employed in Reception. You may have read about her experiences and you may have seen her if you came to the hospital in person!’ 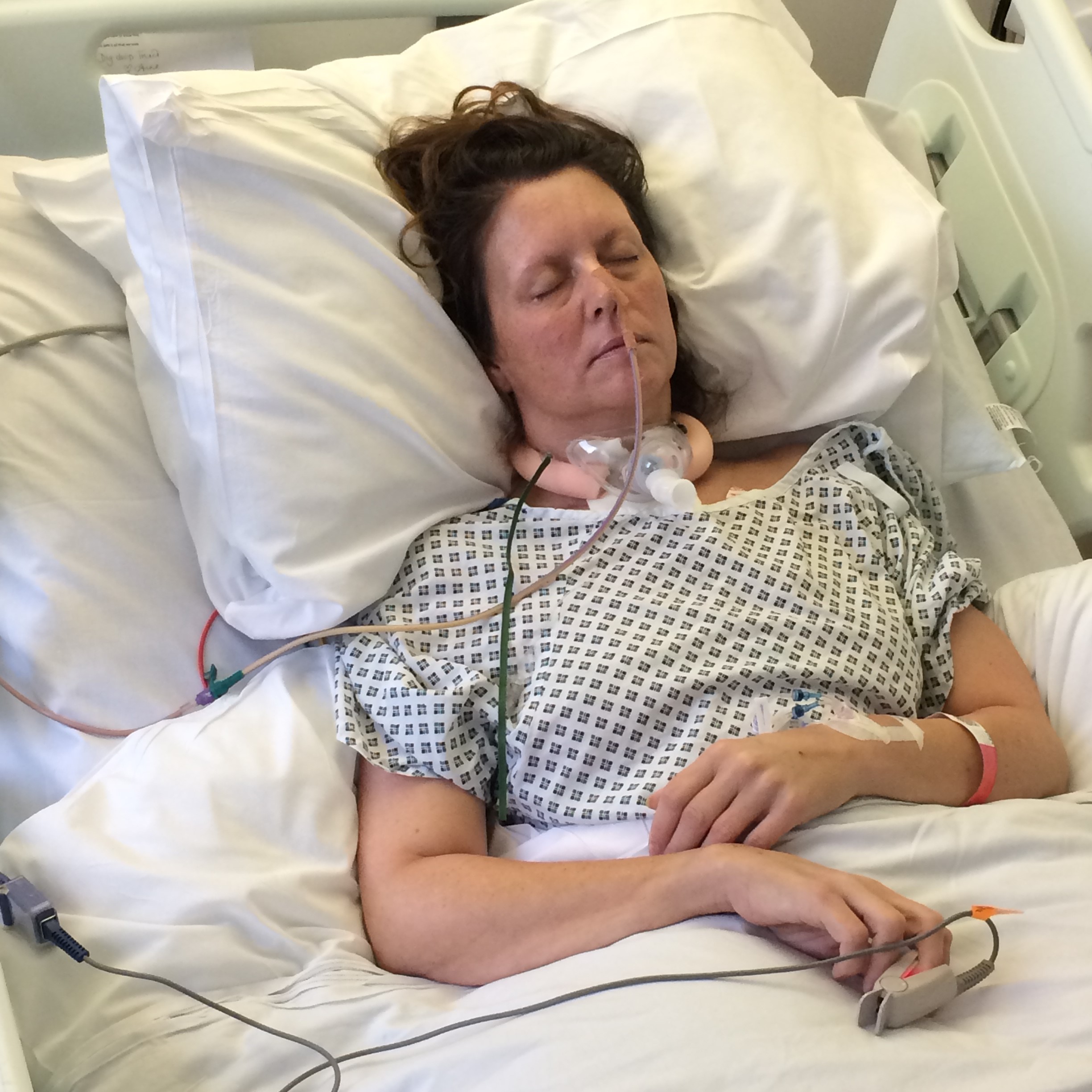 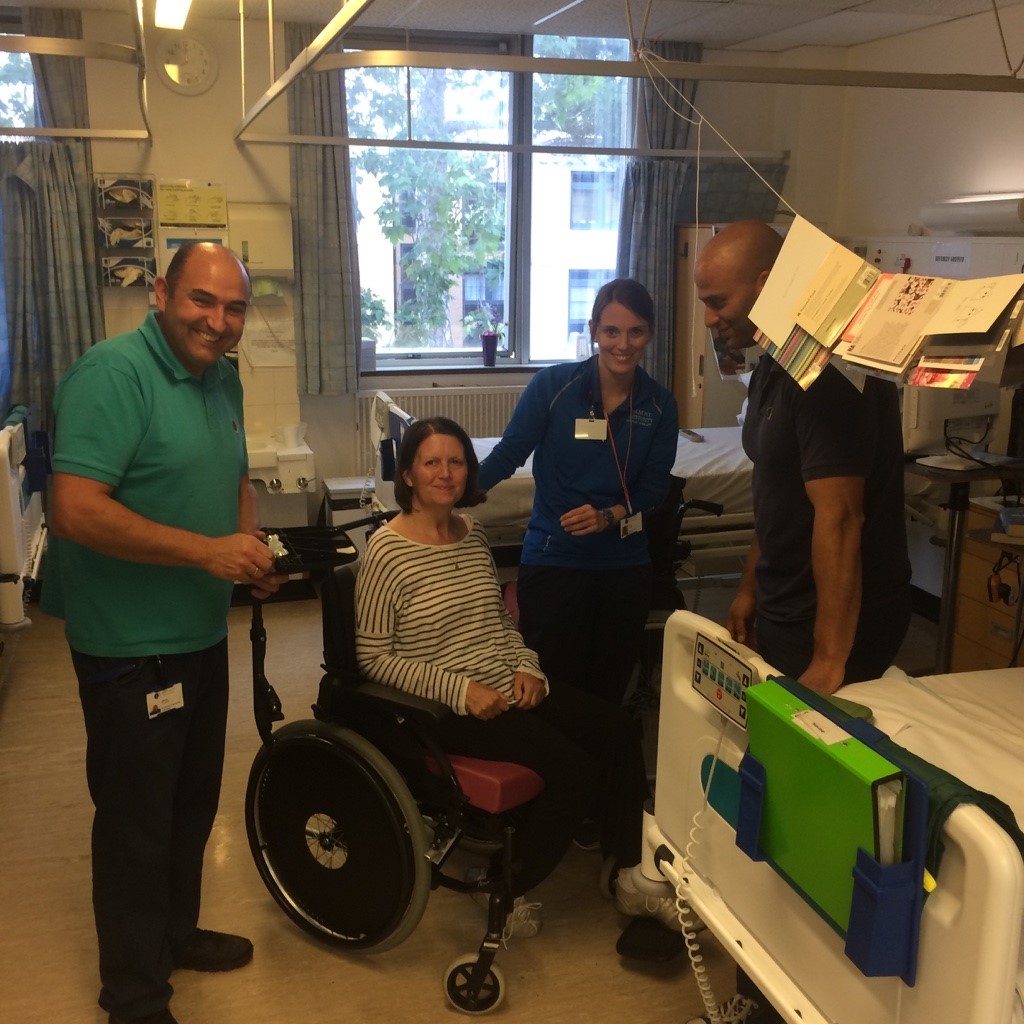 What about weddings at the RHN?

Everyone likes to celebrate a good wedding, and the RHN is no exception.
As long ago as 1922, on the occasion of the wedding of HRH Princess Mary to Lord Harewood, four of the most expert needlewomen among the hospital’s patients made a very beautiful tablecloth as a wedding present. It was elaborate and was graciously accepted.

In more recent years, in 2018, hospital staff celebrated the wedding of Harry and Meghan with a party in the Conference room – first watching the Royal Wedding at 10.30 am followed by the FA Cup at 5 pm!! 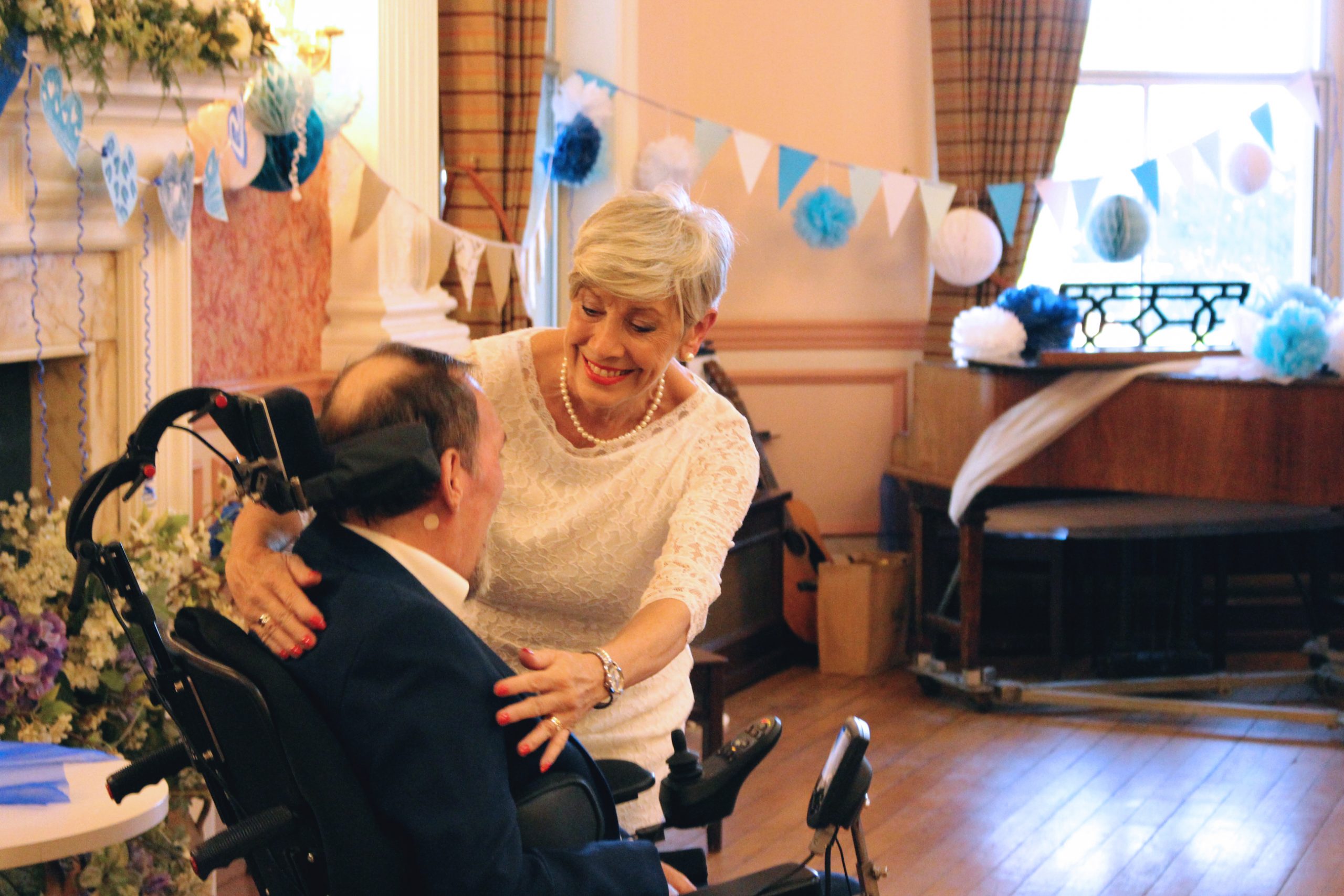 In October 2017, Ian and Doreen celebrated their wedding at the RHN. Ian started an intensive program of rehabilitation in the RHN’s Draper’s ward after blood clots on his brain caused him severe brain damage. His condition began to markedly improve, and one day when Doreen came to visit, Ian surprised her with a message via the Eye Gaze system he uses to communicate: “I want to get married asap. And I want to do it here.” Doreen said ‘yes’ to Ian for a second time!! 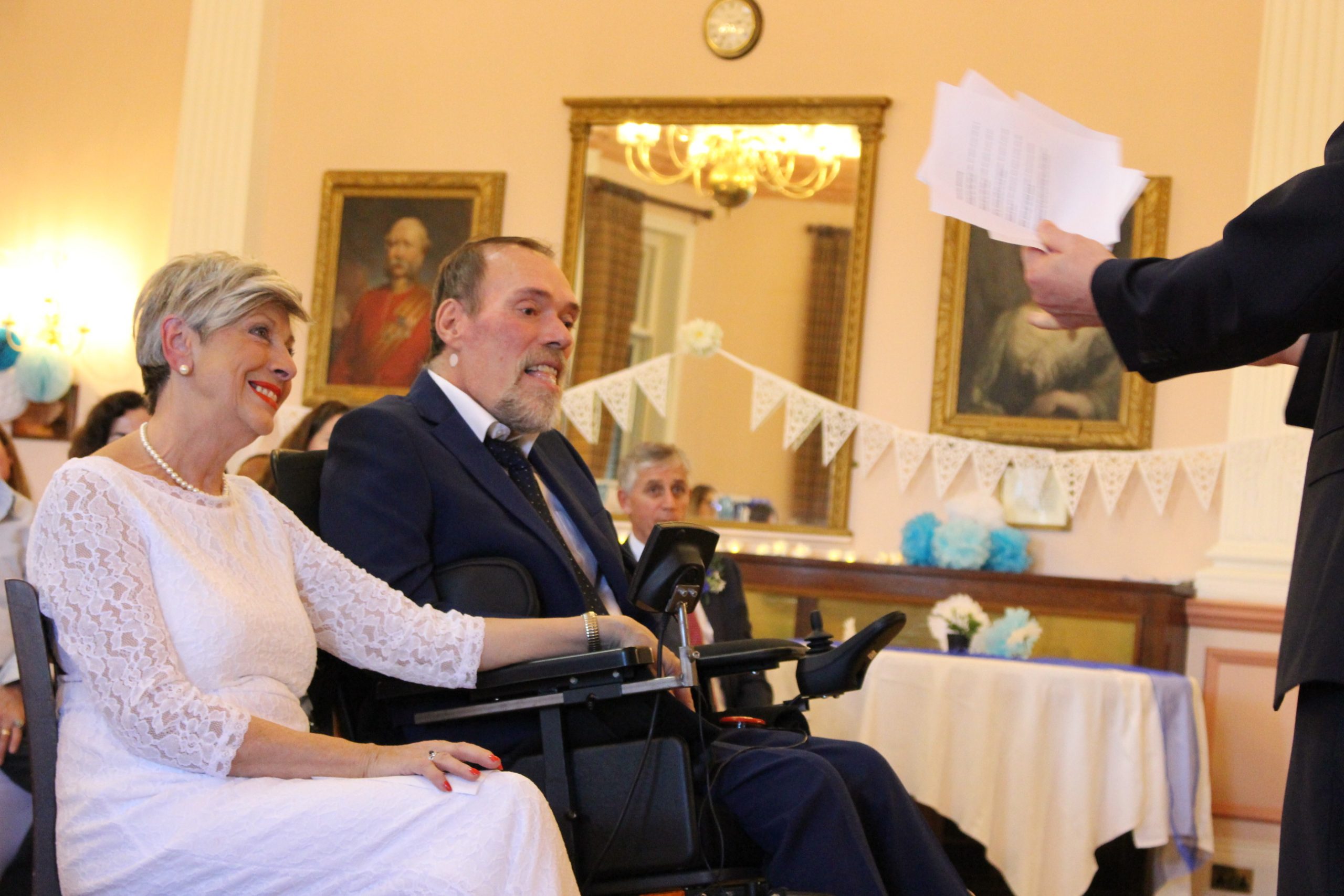 During the Covid-19 restrictions, the daughter of Steve – and RHN resident – was concerned about whether her father would be allowed to join in the celebrations of her wedding. Nathalie approached Laura Chapman, Matron in charge of the specialist nursing home here at the RHN, and necessary arrangements were made so that Steve was able to take part in the wedding. Read article here Nathalie explained:

“It brought us so much joy that dad was able to be part of our wedding. It was the first time he met my then fiancé, Neil while awaiting the service to begin (and appeared to approve!). It was also the first time I had seen dad in person for about six months. It would also have been significant for Steve since he would have had such strong memories of his parish community at St Clement’s Church: the place where he and my mum were married some 44 years earlier and where he would have regularly attended mass.”

Other wedding reasons to celebrate! Thank you to Trudi Brown in Fundraising for posting this on our intranet site on 5 November 2018: “As some of you may know we’ve been trialling our first wedding gift page on our website. We were approached by a young couple, David and Miranda, who wanted to fundraise for the hospital instead of having a wedding list. To help them out we gave them their page on our website… which they were allowed to write the text and supply the photos. They also chose the gift options. As of this lunchtime, their wedding guests have raised £2,700 for the RHN”.